0
Eyes for the world

During an Eyes for the World feedback session at the Mountain Inn Hotel last Thursday, project founder Koen van Pottelbergh and the ladies of Agora gave special recognition to Sanrie du Plessis of Specsavers in Louis Trichardt for her unselfish commitment and support for the project. Pictured is Sanrie with members of Agora Club Amarula. From left to right are Nelly Tlakula (provincial department of education), Koen, Coral Collett, Sandy, Sanrie, Angela Brennan, Lenore Maynier, Lodene Purdon and Chris Helsen (current Agora international president from Belgium). At the back is Laura van Zyl, current chair of Agora Club Amarula.

Last week Belgian optometrist Koen van Pottelbergh made good on his promise to return to the Soutpansberg, not only to follow up on his young patients, but also to expand on his international Eyes For The World (EFTW) project.

Koen and his team from EFTW, a non-profit foundation started by Koen to help improve people’s eyesight, was first welcomed to the Soutpansberg in April last year. This was at the invitation of Louis Trichardt’s Agora Club Amarula ladies. They partnered with their sister club in Belgium (Agora Lokeren Belgium) after adopting the EFTW project as an international Agora support project.

“It all started with the friendship between Sandy van Niekerk from Louis Trichardt and Veerle de Jonge from Belgium. Both are former Ladies Circlers and good friends. Veerle and Koen worked together on the EFTW project. With Agora Amarula and Agora Lokeren being twin Agora clubs, Sandy and Veerle spoke about the EFTW project. At that stage, Sandy was international Agora president and Veerle immediate past president. That is where it started in bringing to project to South Africa,” said Koen.

The EFTW project entails testing children’s eyes and giving them a pair of spectacles if needed. But these are not just ordinary spectacles. They are the product of years of research and development, allowing Koen and his team to hand each child in need thereof a pair of spectacles within five minutes after testing starts – at no charge and with no waiting period to have the spectacles made. For this purpose, Koen makes use of adjustable spectacles (Adspecs) or focussed spectacles (Focusspecs). These spectacles were specifically developed for this project. With the Adspecs, high-quality silicone gel is pumped in between two durable plastic membranes. It allows for 50 optical variants, all possible in one pair of spectacles. Focusspecs, on the other hand, make use of an adjustable slide lens system whereby two lenses are slid across each other to the required magnification. “You have direct solutions and you can see the results immediately,” said Koen

During the EFTW team’s visit last year, Agora Club Amarula tested 1 068 children and gave out 120 sets of spectacles from EFTW. Coupled with this, Sanrie du Plessis from the local Specsavers branch also bought into this project and subsequently provided 15 children with prescription glasses for eye problems ranging from astigmatism to more serious eye conditions such as keratosis. This Sanrie did free of charge.

The past year the EFTW team and Agora ladies have been extremely busy in promoting the project, not only internationally but also locally, and helping to restore especially young children’s’ eyesight. A feedback session in this regard was held at the Mountain Inn Hotel last Thursday evening, shortly after the team had returned from Botswana as part of the EFTW international project. The Agora ladies and the EFTW team have also travelled to Morocco to help people struggling with their eyesight and who cannot afford professional help. Next they are planning to travel to Madagascar and Zambia in February next year. The EFTW project also received major international exposure. During the recent Olympic games in Rio, the Belgium team adopted the EFTW project as a social-development-and-awareness project, entailing their wearing the glasses and also communicating to people the aims and objectives of the EFTW project. “You have to be positive and spread inspiration. It costs nothing to help somebody, but you get a lot in return,” said Koen.

The past year also saw a lot of time going into product development, with the focus shifting more towards the distribution of the better Focusspecs. The Adspecs were initially developed with the help of Prof Joshua Silver, a professor of physics at Oxford University, from the Centre for Vision. The focus to improve the Focusspecs was done in conjunction with Prof John Friedman, an American professor of anthropology living in Utrecht in Belgium. Both professors Silver and Friedman are still heavily involved in the project. “In the end we all strive to better the product,” said Koen. The past year also saw the introduction of Focusspecs sunglasses for people who cannot afford to have their eyes tested for glasses or afford sunglasses to protect their eyes. “That’s why we developed the sunglasses. They are normal Focusspecs, but with a UV 400 tint. We have already seen the advantages in Rio but also the possibilities in sunny Africa and we have already started distributing these sunglasses in Morocco, Ghana, Ruanda, and Uganda, and last week in Botswana,” said Koen.

Koen and the Agora ladies expressed their gratitude towards all who support the project. During last week’s feedback session, Sanrie was also awarded a special EFTW certificate in recognition of her dedication to the project. “A big thank you to Sanrie. With my leaving again and not being around, it is important to have a professional on board with a good heart and not a commercial heart. Sanrie is exceptional. The problems we can’t solves with our glasses, she solves from her side, free of charge,” said Koen. “She would often clear her whole day to help children identified by the project. So for that whole day she does not make any money, yet she stays committed,” Sandy added.

Last Thursday and Friday also saw Koen and the Agora ladies, among them Chris Helsen (current Agora international president from Belgium) and Nelly Tlakula (from the provincial education department) visit two schools in the Soutpansberg, namely Tshiitwa Secondary School and Ozias Davhana School. The aim of the visit was not only to follow up on children treated and receiving spectacles last year, but also to screen new children for possible eye problems. Following their visit, the number of children screened to date in the Soutpansberg alone totals 1 456, with 250 of them receiving spectacles to improve their eyesight.

To ensure the ongoing success of this project, donations in kind or money are most welcome. Should anyone wish to make a contribution, they can contact Sandy (EFTW project convener) at svn@mweb.co.za or 082 897 3947, or Angela Brennan (treasurer) at brennan.angela39@gmail.com or 082 902 6271. For more information on the Eyes For The World Foundation and the work they do, Koen invited residents to visit their website at http://www.eyesfortheworld.be/en/index.html. 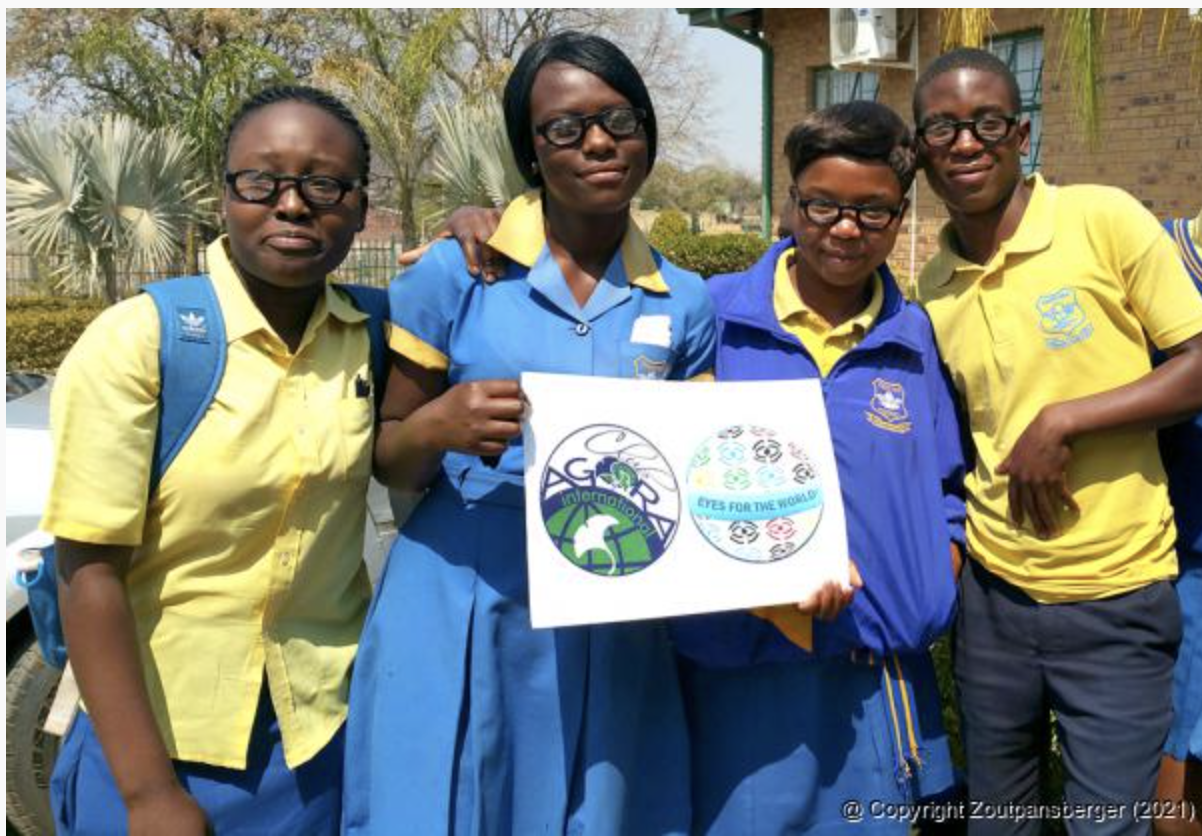 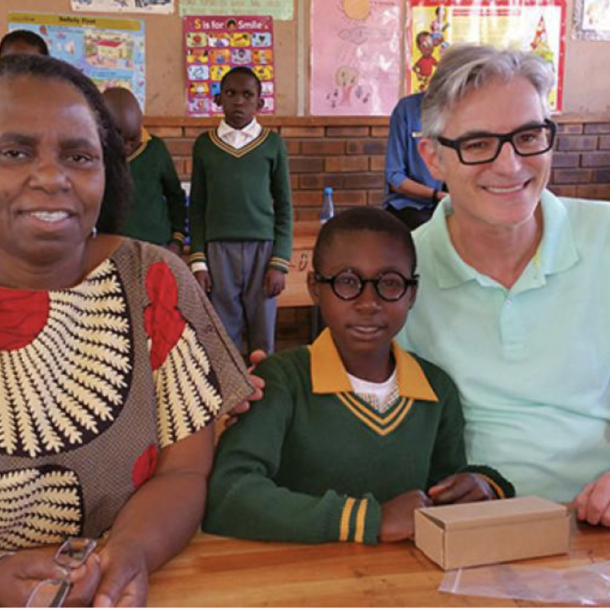 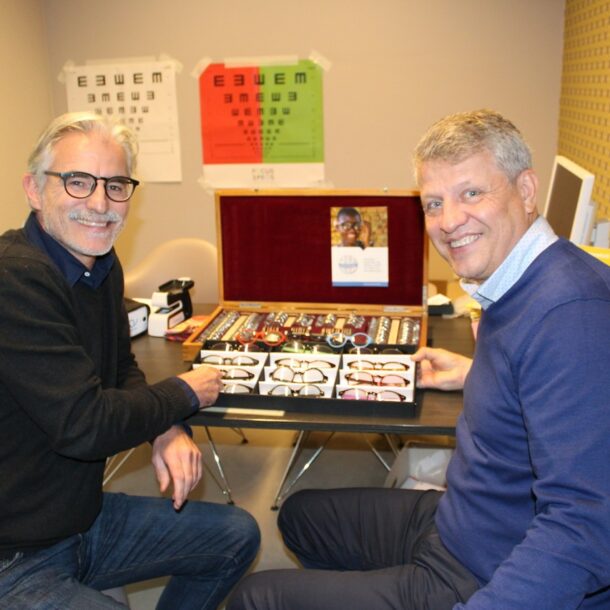 © 2021 Refaced project by Den Brillenman All rights reserved. Made with a 🧡 by Webclix